The final of the International High-Rise Award (IHA) 2022/23 has been decided: The winner of the competition for the world’s most innovative high-rise is the office tower Quay Quarter Tower in Sydney, Australia by 3XN in Copenhagen. The prize comes with 50,000 euros and a statuette created by internationally renowned artist Thomas Demand. For the tenth edition of the award, the artist has designed a new version of the statuette.

The architects Kim Herforth Nielsen (Founder and Creative Director of 3XN) and Fred Holt (3XN Partner and Australian Studio Director) received the award personally at the award ceremony in Frankfurt's Paulskirche by Mike Josef (Head of the Department of Planning, Housing and Sports of the City of Frankfurt am Main) on behalf of Dr. Ina Hartwig (Head of the Culture Department), Dr. Matthias Danne (Deputy Chairman of the Executive Board of DekaBank) and Peter Cachola Schmal (Director of Deutsches Architekturmuseum). 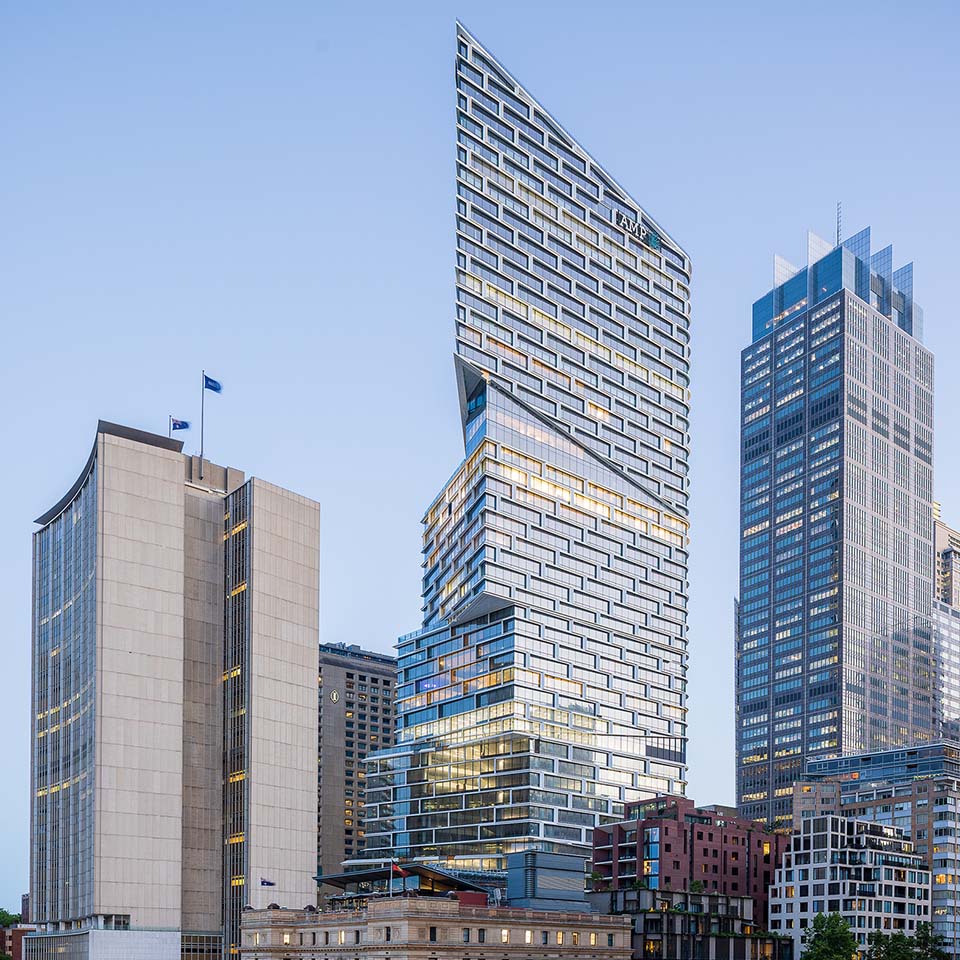 The winning building, Quay Quarter Tower, convinced the jury as an innovative solution for sustainable building in a time of increased ecological challenges by integrating a large proportion of the existing 1970s high-rise structure into the new building. The architects at 3XN have come up with a design that increases GFA on the same footprint while into the bargain retaining a large part of the materials used for the existing tower. Beams, slabs, and cores were reused to book an embodied carbon saving of over 12,000 metric tons – the equivalent of 8,800 flights between Copenhagen and Sydney. Added to this, attention was paid in the design to optimizing heat loads and reducing energy input while ensuring plenty of daylight. According to the jury, the Quay Quarter Tower is quite simply an extraordinary combination of upcycling and densification.

The building is divided into five stacked volumes, which are grouped around the central axis, providing superb views of the Sydney Opera House and Harbour Bridge. Toward the harbor, the floors within these five units are connected by multi-story atria.

The high-profile location of the Quay Quarter Tower is taken into account by prioritizing urban integration. In addition, generous public space was created in the base of the high-rise building. Various points of entry on all sides link the high-rise with its surroundings. In addition to the 4,000 square meters of retail space on three levels, the publicly accessible green gardens and a rooftop café in the midst of the densely built-up district invite visitors to linger outdoors. The combination of office and retail, along with the diverse range of leisure activities, enhances the inner-city neighborhood and public space and enlivens it beyond working hours. At the same time, unexpected urban retreats are created in the high-rise cityscape.

Statements by the winner and partners of the IHA

Kim Herforth Nielsen, Founder and Creative Director of 3XN, thanked all the promoters: “Quay Quarter Tower is the most important transformation project ever completed by 3XN – one that would not have been possible without an ambitious client and a great team. It transforms an existing tower in central Sydney that no longer worked for its users, giving it new form and character, and extending its lifespan far into the future. Mid and late 20th century towers are reaching the end of their usable lives, and we know we cannot demolish and build the way we have in the past. Quay Quarter Tower is proof that transformation in architecture is possible at a large scale. We are so thrilled it has been recognized by this award – it recognizes this milestone for architecture, the bold and visionary work of so many, and emphasizes the importance of daring to reimagine how we approach the future of the built environment.”

Dr. Matthias Danne, Deputy Chairman of the Executive Board of DekaBank, emphasized: “Quay Quarter Tower is an urban improvement for Sydney. The high-rise represents a successful transformation of a classic office tower into a modern building that meets the highest standards. Particularly impressive is the innovative concept of largely retaining the structure of the existing building and thus significantly reducing the carbon footprint. This makes Quay Quarter Tower forward-looking and a pioneer for more sustainable and resource-efficient architecture.”

Mike Josef, Head of the Department of Planning, Housing and Sports of the City of Frankfurt am Main, said: "The International High-Rise Award is celebrating its anniversary this year: It is being presented for the tenth time in Frankfurt's Paulskirche to the world's most innovative high-rise building. Over the years, it has become a benchmark for global high-rise development and enjoys international recognition. For this, I would like to sincerely thank our partners, DekaBank and the German Museum of Architecture. Frankfurt am Main is the right city to award this award: Our skyline is not only a landmark, the entire top ten of Germany's tallest skyscrapers are in the Main metropolis – and our skyline will continue to grow in the coming years."

Peter Cachola Schmal, Director of Deutsches Architekturmuseum (DAM), explained: “In the near future, the world will have to accommodate some three billion people under the age of 18, or the same number as the entire population of the world back in 1930. This means we need to densify. To do so, we will quite simply have to build higher. This will be the norm. Quay Quarter Tower in Sydney is four floors higher than its predecessor, adding space on the same footprint. At the same time, it maximizes carbon savings. A win-win situation.”

During the award ceremony, the four other short-listed projects were also honored: 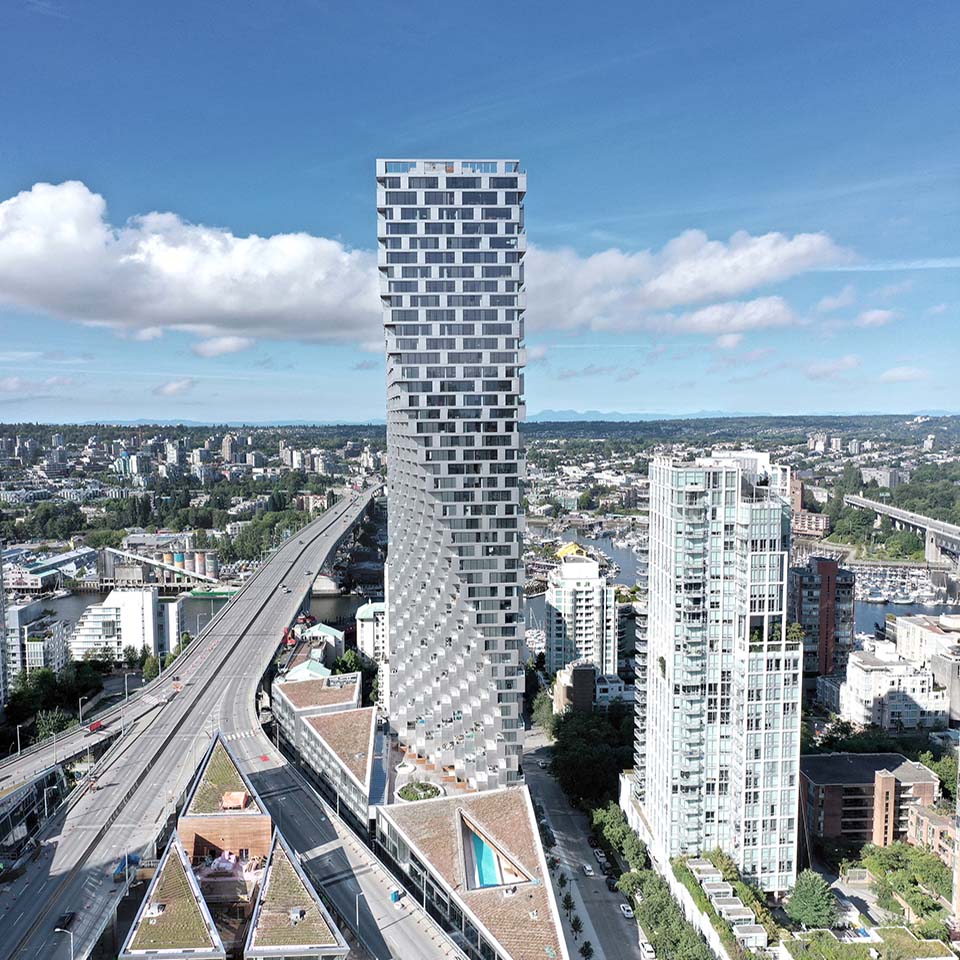 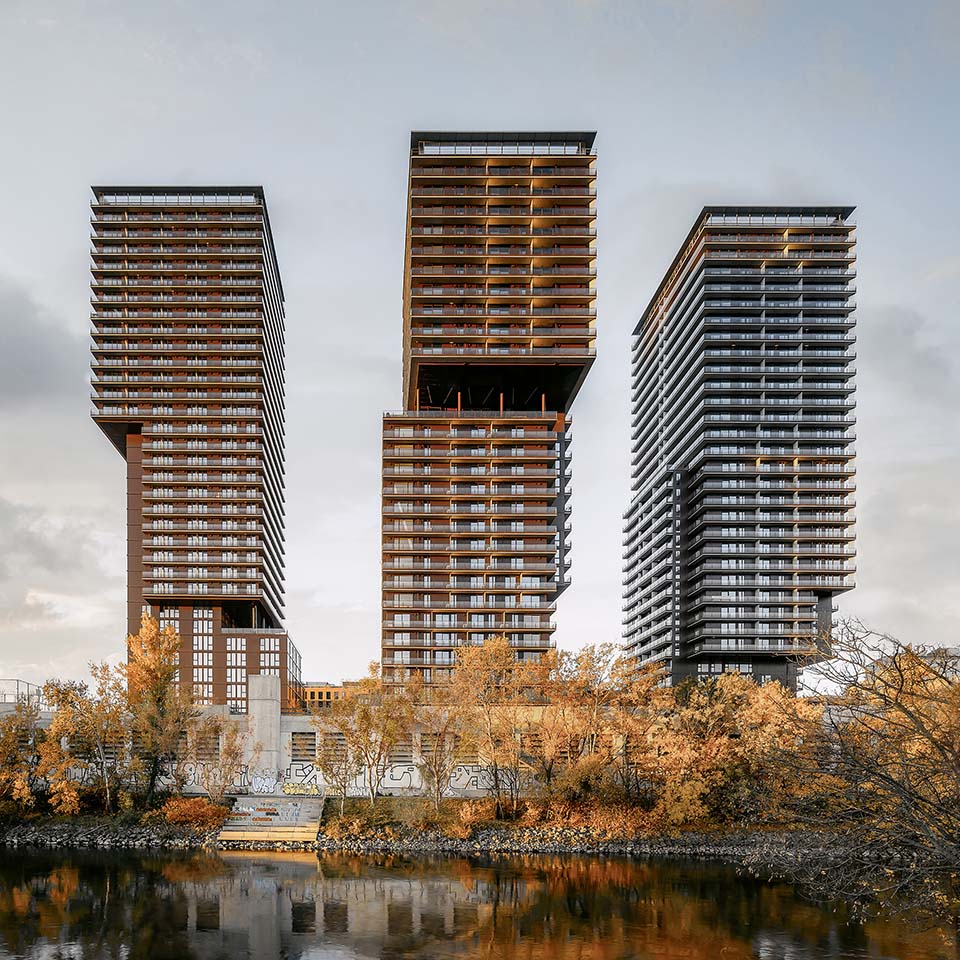 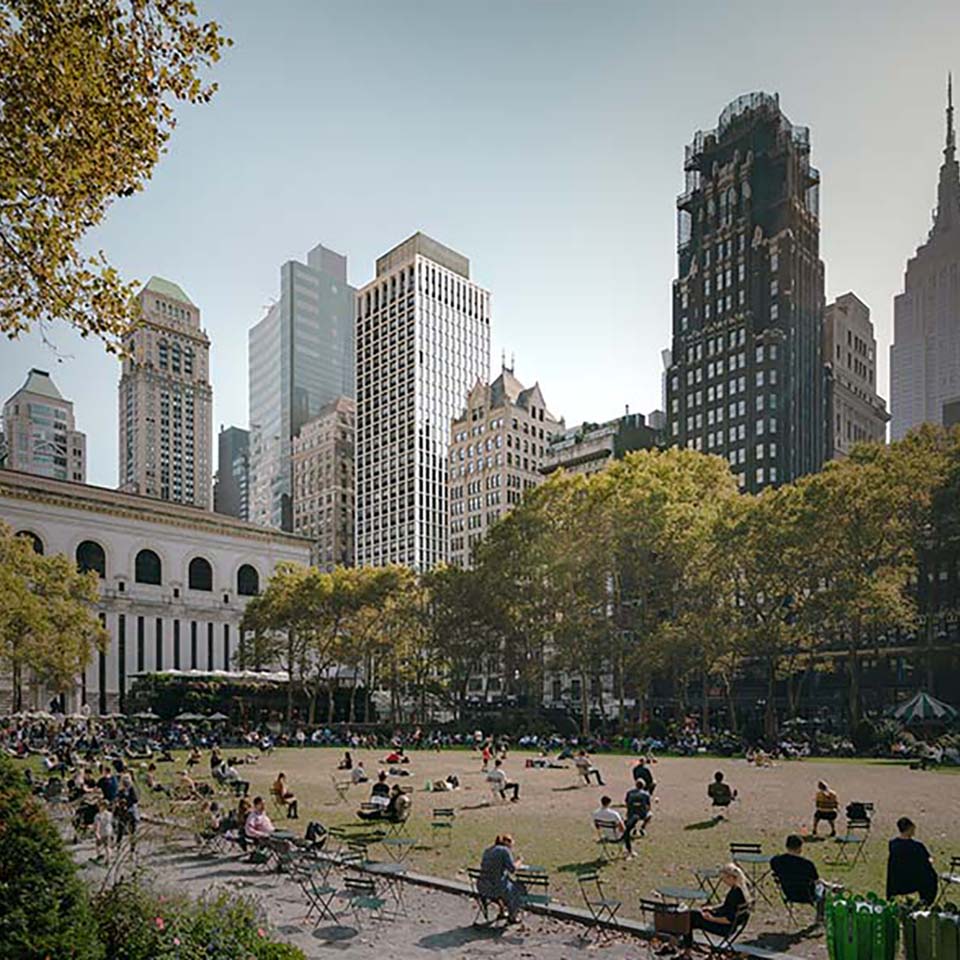 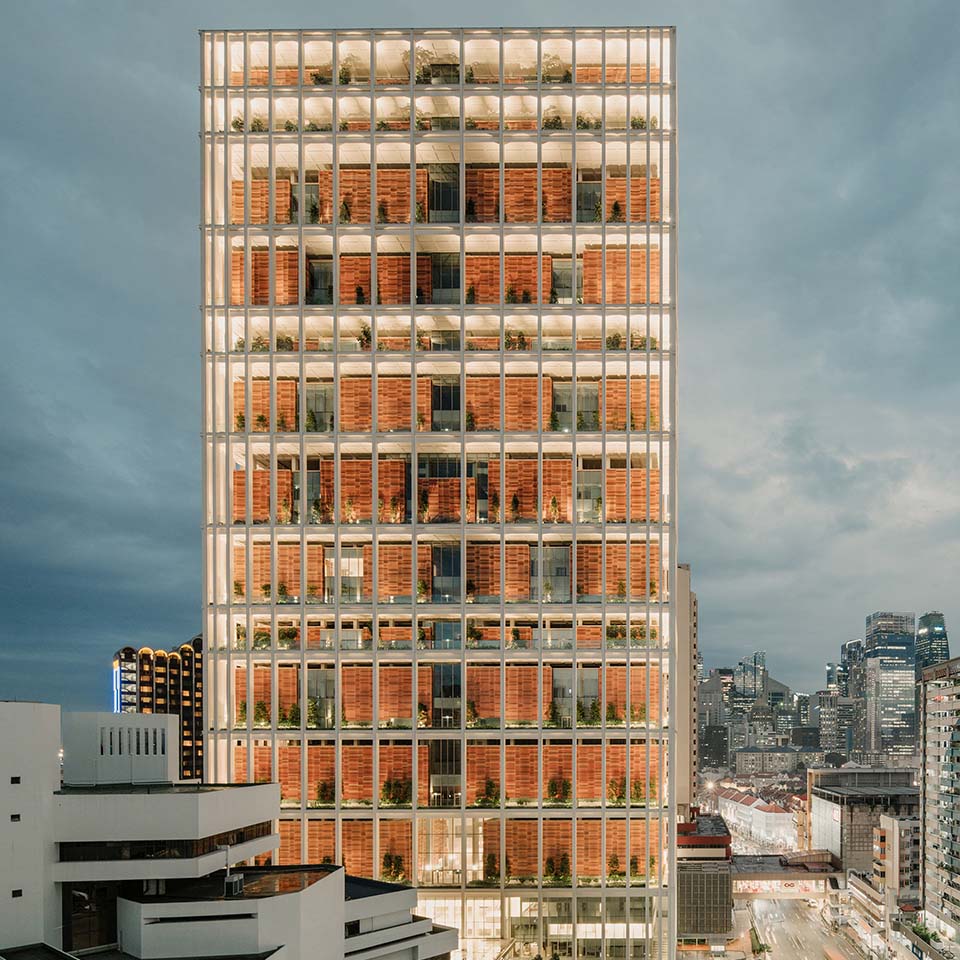 From over 1000 high-rises that were completed worldwide over the last two years, Deutsches Architekturmuseum (DAM) nominated 34 outstanding buildings from 13 different countries. An international jury of experts from architecture and engineering practice, education and the partners of the IHA, namely DekaBank, the City of Frankfurt, and Deutsches Architekturmuseum – chaired by Sven Thorissen (Architect MVRDV, Rotterdam) – gathered to select the final five for the shortlist and subsequently the winner. On the way to their decision, the jury considered how a high-rise architecture could assume responsibility for the environment and future generations, which is why the aspect of sustainability was given the highest evaluation priority.

The International High-Rise Award (IHA) was jointly initiated in 2003 by the City of Frankfurt, Deutsches Architekturmuseum and DekaBank and was awarded for the first time in 2004. Since then, it has been organized and financed cooperatively every two years. Hence, this year the prize was presented at Frankfurt’s Paulskirche for the tenth time.

The IHA is aimed at architects and developers whose buildings are at least 100 meters high and have been completed in the past two years.

The exhibition Best High-Rises – International High-Rise Award 2022/23, which the Deutsches Architekturmuseum (DAM) will show at the Museum Angewandte Kunst (MAK) in Frankfurt/Main from November 10, 2022 until January 22, 2023, includes all nominated projects in addition to the award winner and the finalists.

Previous recipients of the IHA: